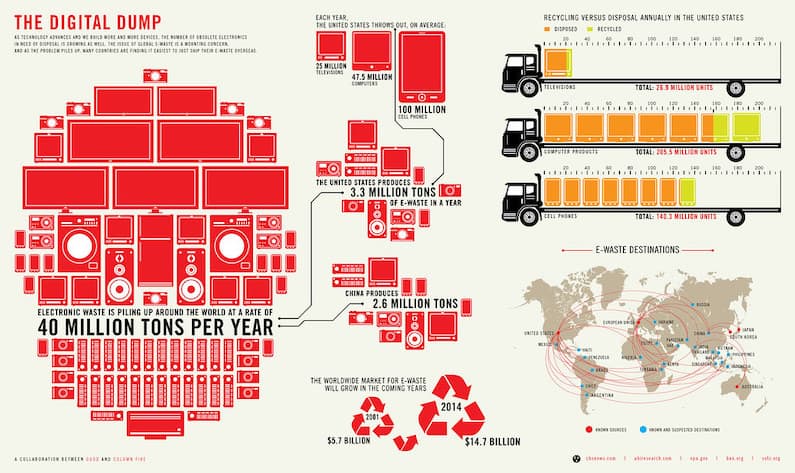 The ewaste international dumping disaster began several decades ago when an international treaty called the Basel Convention was enacted by many European Union and NATO countries in 1989. The purpose of this treaty involved preventing movement of hazardous waste to underdeveloped countries. At the time, hazardous waste consisted mostly of asbestos, toxic industrial waste, old tires and incinerator ash. In fact, one particular incident leading to the Basel Convention involved the dumping of tons of incinerator ash on a Haitian beach by an American ship.

In 2002, a member of the Basel Action Network (BAN) released a documentary called “Exporting Harm: the High-Tech Trashing of Asia”. In the film, BAN’s Jim Puckett investigated the water quality of a river near Guiyu, China. Puckett had learned the residents of Guiyu were actually “cooking” electronic waste (discarded cell phones, computers, tablets, etc) to extract copper, gold and other valuable metals. Villagers were then dumping the waste residue into the river once all precious metals had been extracted. Puckett found dangerously high amounts of hydrochloric acid, burned plastic and other carcinogens in the river’s water.

Tracking Worldwide Ewaste Pollution: Where Does Most Ewaste Go?

-In 2016, Puckett conducted an experiment to find out exactly where e-waste was being shipped and disposed of improperly. He put GPS trackers on thousands of discarded electronics and discovered that nearly one-third of ewaste tracked went overseas to Taiwan, Thailand, Kenya, China (Hong Kong), Pakistan and the Dominican Republic.

Puckett traveled to areas directed by GPS data. In China, he discovered a large, fenced-in “factory” where unmasked workers spent 12 hours a day taking apart LCD television sets. He noted in his report the factory floor was “littered with broken tubes that were once the fluorescent lamps inside flat-screen TVs. Breaking these tube lamps releases mercury vapor. Even tiny amounts of mercury vapor can cause neurological damage to humans and animals”.

What is Behind the Ewaste Worldwide Problem?

In addition to consumerism and the obsession with purchasing the latest electronic devices, worldwide ewaste pollution is also fueled by entities that don’t want to pay for proper disposal of ewaste. In some cases, it doesn’t cost these entities a penny to ship ewaste to overseas countries where there are no regulations or oversight regarding ewaste disposal methods.

Although China currently receives the biggest percentage of global ewaste (70 percent), Asia is starting to crack down on enforcing recycling regulations. Ewaste international experts expect West African countries such as Nigeria, Ghana and Burkina Faso will be the unfortunate recipients of additional ewaste due to this crackdown.

Moreover, ewaste worldwide is typically dumped in or near villages where people do not have access to jobs or humanitarian assistance. Consequently, the water, soil and air surrounding ewaste dump sites quickly suffers from biomagnification and bioaccumulation, two terms describing how toxic metals and chemicals harm ecosystems. Ewaste bioaccumulation occurs when organisms in water and soil absorb harmful chemicals faster than they can metabolize and excrete them. Biomagnification is the passing of toxic materials to other organisms (humans, livestock) via consumption of contaminated organisms.

As consumers in wealthier countries rapidly upgrade their non-5G devices to 5G smartphones and tablets, the flood of ewaste from discarded electronics will compound an environmental catastrophe already happening.

In fact, any electronic device that is incompatible with the impending pervasiveness of 5G networks will likely end up in U.S. landfills or, even more likely, in South Africa, rural China and other underdeveloped areas.

Potomac eCycle is proud of the accomplishments we have made over the years to minimize the environmental and human calamity of worldwide ewaste pollution. For over a decade, we have provided affordable, compliant recycling and disposal services for individuals and companies in Virginia, Washington, DC and surrounding areas. We also offer data destruction services and have been R2/RIOS-certified. Call today to help us continue reducing the ewaste worldwide problem by disposing of your ewaste responsibility.